SC awards death penalty to woman and her lover

NEW DELHI: The Supreme Court on Friday imposed death sentences on a woman and her lover who wiped out her entire family -- parents, two brothers, sister-in-law and two minors - after heavily sedating them to remove opposition to their love affair and also to grab the family property. 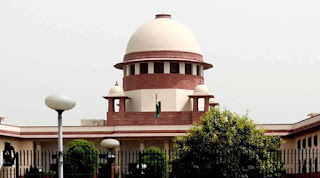 Supreme Court on Friday imposed death sentences on a woman and her lover who wiped out her entire family.

The apex court, which is generally lenient in awarding sentence to women convicts and of late has been increasingly reluctant to impose capital punishment, was shocked by the brutality of the crime.

A bench of Chief Justice H L Dattu and Justices S A Bobde and Arun Mishra dismissed the appeals of Shabnam and her lover Saleem and upheld the death penalty imposed on them by a UP trial court which was confirmed by the Allahabad HC.

Writing the judgment for the bench, Justice Dattu said, "Here is a case where the daughter Shabnam, who has been brought up in an educated and independent environment by her family and was respectfully employed as a teacher, influenced by the love and lust of her paramour has committed this brutal parricide (act of killing one's father, mother or other close relative), exterminating seven lives including that of a 10-month-old innocent child."

Shabnam, who was pregnant at the time of crime, had conspired with her unemployed lover Saleem and had served tea heavily laced with sedatives to her family members on the night of April 14, 2008. Saleem entered the house at Bahman Garhi in Amroha and the two slit the throats of the seven family members. She strangulated the 10-month-old child.

The CJI said, "Not only did she forget her love and duty towards her family, but also perpetrated the multiple homicides in her own house so as to fulfill her desire to be with the co-accused Saleem and grab the property leaving no heir but herself. Both the appellants wrench the heart of our society where family is an institution of love and trust, which they have disrespected and corrupted for the sake of their love affair."

Amicus curiae Dushyant Parashar pleaded with the court that Shabnam, who was pregnant at the time of crime, was now the mother of a five-year-old child, who would be orphaned if both she and Saleem were awarded death penalty. He had pleaded for life sentence for the couple citing their young age.

The court rejected the plea. It said Indian society has experienced through centuries that daughters were more caring than sons towards their parents and feel the pinch more when the relationship with parents go awry.

It said a daughter was a care-giver and a supporter, a gentle hand and responsible voice, an embodiment of the cherished values of our society and in whom a parent placed blind faith and trust. The bench said society abhorred parricide as a person trusted blindly could not be seen to murder those who trusted him/her.

Parricide assumes indescribable ghastliness when a teacher-daughter murders her teacher-father and her entire family, the bench said. "It is the combined concoction of all aggravating circumstances, that is, victims of the crime, motive for commission of murders, manner of execution, magnitude of crime and remorseless attitude of the appellants-accused that stands before us in this case," the bench said and rejected the plea for award of life sentence to the convicts.

Past sentences
* Renuka Shinde and her step-sister Seema Gavit were convicted in 2001 for kidnapping 13 children, forcing them to join a gang of thieves and murdering at least five of them. Shinde, 45, and Gavit, 39, were found guilty of kidnapping the 13 children in Maharashtra. They were initially accused of murdering nine of their victims, but prosecutors were only able to prove that they killed five. The Supreme Court upheld their sentence in 2006. The President rejected their mercy pleas last year.

* Sonia and her husband were awarded death penalty by the SC in 2007 for murdering her father, mother, sister, step-brother and the entire family including three young children - one 45 days old, another two-and-a-half-year-old and the third four years old to resist her father's decision to give the property to her stepbrother.

* Shabnam is the third to be awarded death penalty in the last decade.
Posted by Abolish Death Penalty India at 2:25 AM