Court buys into the 'insanity' argument in the delayed plea placed before it.

In a significant twist in the tale, a three-judge bench of the Supreme Court of India last week put a stay on the execution of death penalty against State Transport driver Santosh Mane, who had mowed down nine people and injured 37 others near Swargate, in the morning of January 25, 2012.

The SC surprisingly allowed the Condonation of Delay (allowing the delay in filing the appeal), affidavit filed by Mane's lawyer, Dhananjay Mane, and allowed the appeal, claiming that since the driver was 'insane' his death sentence needed to be revoked.

In September last year, the Bombay High Court upheld the death punishment and the state was under the process to execute the punishment. With this stay now, the execution is postponed for an indefinite period.

The bench has stated that till any further order, there should be no execution of death sentences, further asking the government to furnish details of the case and evidences. Time is also allowed for translation of documents in English, since most of the evidences of the case are written in Marathi. The next hearing is scheduled in May.

Speaking to Pune Mirror, advocate Dhananjay Mane said, "The bench of SC has considered the appeal plea, stating that the police and investigating agencies had issued wrong evidences against Mane and neglected to focus on vital medical evidences of Mane's psychiatric treatment. Besides this, the role of MSRTC authorities were also ignored while the hearing was on at both the Pune sessions court as well as Bombay HC."

Mane said the delay of completion of formalities was caused by "miscommunication while sourcing a certificate from Yerwada jail confirming his formal presence there for three years. The delay was caused despite filing the application well within the time frame".

This, said the advocate, has been conveyed to the SC bench, and extra time sought to translate voluminous documents from Marathi to English.

Regarding this development, an official from the district government pleader's office, said, on condition of anonymity, "The applicant has the responsibility to prove his innocence by describing the loopholes in the case. Subsequently, the state will submit its side since this was an exceptional case where the crime was so cruel, diabolical and revolting, that it shook the collective conscience of the society."

Janak Mane, Santosh Mane's older brother, refused to comment on this development, choosing to hold his words till the final judgment.

On that fateful day of January 2012, Mane was denied a change from night duty to day duty by his superiors at Maharashtra State Transport Corporation. Heckled, he hijacked the bus from the Swargate depot and drove wildly on the wrong side of the road and on one-way routes for 16 kms, killing and injuring many. 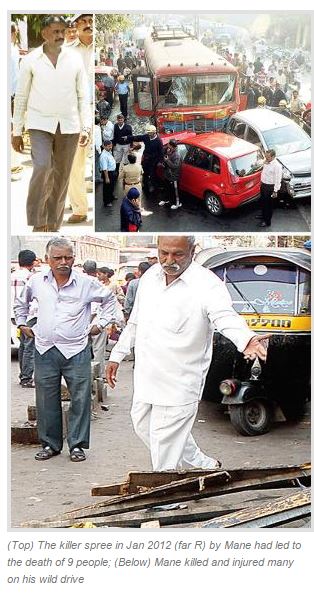 WHAT WAS SUBMITTED BEFORE SC

Advocate Mane said, "There is no doubt that Santosh Mane was insane and we are going to submit the same thing before the SC, as the prosecution has failed to prove that Santosh had any intention of going on a killing spree."

Quoting Section 84 (acts of a person of an unsound mind) of the IPC, the lawyer claimed that his client should get the benefit of insanity. Since he had no enmity with the deceased and others injured in the mishap, a case of murder cannot be established.

►► The bench of SC has considered the appeal plea, stating that the police and investigating agencies had issued wrong evidences against Mane and neglected to focus on vital medical evidences of his psychiatric treatment

Posted by Abolish Death Penalty India at 1:59 AM