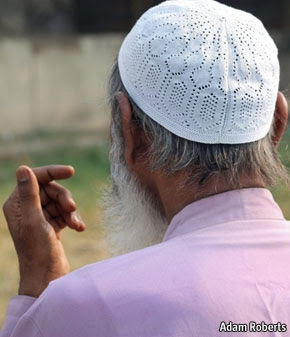 IN THE crumbling Muslim quarter of Lucknow, the capital of Uttar Pradesh, India’s most populous state, a man with white beard and lilac kurta pyjamas weaves briskly through the alleys. Ahmadullah does not want to be seen at home talking to strangers, but agrees to meet in a nearby park. He is not, he says, ashamed of his job, but he does not want nosy neighbours discovering his profession. “People do not look with a very good view on it,” he says, “and they would want to come and gawk at me, a hangman.”

With a gentle smile he recalls that in 1965, when he took over from his father as Lucknow’s chief executioner, the state paid 25 rupees ($5 in those days) a hanging, on top of a salary. He thinks he has conducted 40 in all, being called to work in Delhi, Assam and Madhya Pradesh in the years when India’s judges—and politicians—had few qualms seeing the death sentence carried out.

Today, though still on the books and paid monthly, he is idle. He says he last hanged a man over two decades ago: an insurgent in Assam, who had kidnapped and killed a child. (The rate per execution had, by then, risen to 10,000 rupees.) Though the death sentence is frequently passed on defendants, its use is extremely unusual since a Supreme Court order, in 1983, reserved it for the “rarest of rare” cases. A single hanging has taken place in India in the past 17 years.

Led by retired judges and the Hindu newspaper, a campaign is under way to remove it altogether from the statute books. The issue flares into mainstream debate only when prominent killers—such as Ajmal Kasab, the surviving attacker among a group of Islamists who carried out a massacre in Mumbai in November 2008—appear to be heading to the gallows. Mr Kasab’s latest appeal against his execution went before the Supreme Court late in January, but is likely to march on for years yet.

Ahmadullah favours the penalty, though he talks of the harrowing execution of three brothers convicted of murder, one of whom pleaded his innocence—convincingly, Ahmadullah says—to his anguished last breath. Otherwise the hangman talks with pride of his professionalism, ensuring as quick and painless a death as possible: “he drops dead, not even alive when he drops, this is my speciality.”

Yet he sees no future in it. British rulers ordered “so many murders”, he says, “my father was unable to sit, he was always called for a hanging”. Today there is nothing to do. Though he would work again, if ordered, he expects not to. Nor does he wish to see his son continue in the family business. “I will be the last of the hangmen.”